We, the people of the United States, who 230 years ago dreamed of forming a more perfect union. The American Dream is of a people who are decent, hard working, caring, generous, fair, democratic, without prejudice.

In 2016, all those ideals seem like a pool of water on the outhouse floor. Did we ever really have the dream or were we just pretending? Was America ever great? Has the American Dream morphed into a global nightmare?

Nora Ligorano & Marshall Reese don’t give answers. They don’t provide new planks for a party platform or concrete political actions. Their art gives us a holding space – a place away from the catastrophes going off with the regularity of Big Ben chiming the hours in London. The American Dream Project is a holding space where we can feel safe – temporarily and symbolically. 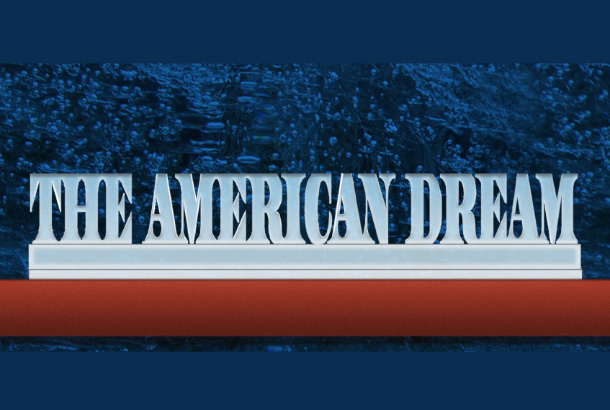 A holding space is a transitional object, like a child’s teddy bear or security blanket. Do you remember as a child being suddenly on your own, feeling abandoned, scared, unprotected? The objects we grasped in those moments gave us timeout from our anxieties. That’s what The American Dream Project gives us: time to think about how so much we cherished, how much we hoped for, is melting away in the hot sun of a cruel politics.

LigoranoReese’s melting ice sculptures are collective holding spaces, allowing us moments to reflect in the shade of art.

“The American Dream” may melt down in 24 hours in this highly symbolic work of process art, but that time period stands for a decades-long melt of the American Dream for millions of our fellow citizens. The dreams of immigrants have melted in the withering heat of right-wing scorn, despite a groundswell of support for the Dream Act, which would protect new young Americans from being deported. The dream of home ownership is just a puddle in the back yard of a foreclosed house thanks to hedge fund managers – or is it monsters? – and their “credit default swaps.” The dream of a college education without debt: lots of luck! The dream of a decent job with health benefits and long-term security: without strong unions, it is just a mirage. The dream of a life free of gun violence: the tide seems to have turned in the wrong direction. The dream of racial, gender, and transgender freedom: it’s in our reach but the struggle is not over.

All these dreams are being blowtorched by malevolent forces that are intent on melting us away.

Or melting away the best part of us.

The American Dream Project is a warning that things can get worse.

For 20 years, LigoranoReese have been making politically acute works of public art. Public art is often heroic and celebratory: statues of heroes or obelisks marking great achievements. Many American towns have memorials to the war dead and while most of these are traditional, the most famous one, Maya Lin’s Vietnam War Memorial in Washington, DC, is, like The American Dream Project, elegiac.

But LigoranoReese introduce two unexpected elements: their public art is both comic and temporary.

The fundamental feature of LigoranoReese’s ice sculptures is that they start out as massive objects, weighing two tons, but by the end of the day they are no more than memories. The sculptures are constantly metamorphosing, changing shape at every moment. In this sense, these works are more lifelike than other kinds of public art, imitating the way life is a constant series of changes.  While the change from minute to minute is, well, glacially slow, the pace picks up near the end as chunks drop off and gaping holes appear in “The American Dream,” creating poetic word plays with the remaining letters and parts of letters.

The American Dream Project gives us time to contemplate the political forces  that have brought us to this pass.

Because The American Dream Project is a massive ice sculpture that is melting before our eyes, it defies the solemn and didactic nature of much public political and memorial art. It’s funny, but not in a way that undermines its subject. The American Dream is something we, the people, have imagined: it’s not writ in stone but carved out of ice, that most perishable substance.

If we don’t resolve to do a whole lot pretty soon, the American Dream will perish from the earth.

“The American Dream” is just three words, just a concept, but as we meditate on the ice carving, as we watch those words, that idea, disintegrate, we laugh and we cry.