In Palestine, the impossibility of artistic freedom and the denial of freedom to move within one’s own country conspire as an everyday reality. The colonial project, with its settlements and army, poses difficulties both for movement and for constructing works of art. Cities that were previously home to Palestinians are today, for most of them, very difficult to reach.

For Palestine’s Young Artist of the Year Award (YAYA) exhibition this year, for example, second-prize-winner Somar Sallam, who lives in Algeria, was afraid of being barred at the border, so chose not to attend. Similarly, shortlisted artist Majdal Nateel did not obtain a permit to travel out of Gaza, and therefore could not see her finished work.

This may explain a fascination by Palestinians with the freedom of birds. In this year’s Qalandiya International (Qi) exhibition, for example, a performance called “Flight-Jalazone”, by Nida Sinnokrot, involved pigeons with LEDs attached to their legs creating a blue wave in the sky over the Jalazone refugee camp, thereby combining simultaneously two unreachable places: sea and air.

When writing on the Qalandiya International event, one must analyze the historically complex configurations not only of the biennial event itself, but also of the geopolitics of the Middle East and, specifically, the Palestinian region.

The name of the exhibition, Qalandiya, evokes the complicated relationship of Palestinian art to space, memory, and movement. Qalandiya is also the name of a small village located on the road connecting Ramallah to Jerusalem. Its geopolitical history is intense, and it has changed rapidly in the last 60 years. Today, this village—and its name—represents the busiest checkpoint for Palestinians, mostly from East Jerusalem, crossing Israel-Palestine with permits. Qalandiya also shares its name with a refugee camp from the Palestinian exodus of 1948, when approximately 700,000 were forced to flee their homes.

The village of Qalandiya houses the empty terminal of what was the first airport in the region, constructed in 1920 under the British mandate for Palestine. It was renamed Jerusalem Airport after 1948 and continued functioning as a civil airport until 1967, when it was seized by the Israelis. It was closed finally during the Second Intifada. Afterwards, an 8-metre-high wall was built very close to it, altering the historic narrative of both place and name. Once a runway to flight, today a place of queues—a long wait to reach Jerusalem.

This year’s exhibition title, “This Sea is mine,” comes from the poem “Mural” by Mahmoud Darwish, who uses his verses to express a lost place, an atmosphere of remembrance where the lines always change, anchored by a constant need to reclaim the past.

The title gives us a duality contained in every statement, in every work, between the possibility of having something and the reality denying it—between the doxa (appearance) and the aletheia (reality). The reclamation narrates not only belonging to the sea, but also today’s impossibility of reaching it, just as most Palestinians in the West Bank cannot reach the exhibitions in Gaza or Haifa. Similarly, the images that compose the banner of Qi depict an airplane without its wings and a boat stuck on the shore—deprived of their original function, unable to reach the air nor the sea.

Possibly the most important work of Qi is the proposition itself, the making of such an event. Composing an event in a society under a colonial power whilst using a colonised language—the contemporary language of art, constructed and erected by those who are economically in power—exposes the fact that colonialism is still happening, using much more complex speech and extremely varied mechanisms and apparatus. Qi grapples with the question of how one copes with cultural colonialism, which surpasses its borders, imposing manners of doing and producing subjective material, carrying hidden ideologies and forms of behaviour, and maintaining a hegemonic modus operandi in the use of language.

Qi grew out of a collaboration between 13 organizations of different kinds, such as The International Art Academy of Palestine, an Art School founded in the 2000s; the Al Ma’mal Foundation for Contemporary Art, which promotes art residencies in East Jerusalem and plays a major role in contemporary Palestinian art; and the A.M. Qattan Foundation and the RIWAQ, both of which approach educational and architectural environments in different ways. In 2012, these organizations came together to form a new project that challenged the hegemonic culture of art in the region. Qi fosters the autonomy and freedom to present a series of events in a place that is often perceived and portrayed in only one (often erroneous) way.

Qi presents exhibitions, symposiums, walking tours and screenings in pre-1948 Palestine, along with Amman, Beirut, and London. While this form of multi-site biennial, very much in vogue, shows that the trend of fragmenting space has arrived at many big art events, in this case it reveals a higher complexity: its exhibitions are sometimes inaccessible to publics through the ongoing occupation, which is the reality of Gaza.

Recognition is of paramount importance for Palestinians, who pursue it using long-existing narratives to deal with old geopolitical problems. The same recognition also permeates the world of production, but the very imitation that gives us pleasure may hold hidden ideologies and discourses that could have counter effects.

Here, artists aspire to engage with, and be recognized by, audiences who come from various countries, and to compel them with a specific kind of work. To do this, they use a specific kind of grammar, composed and presented for many centuries as the necessary means to achieve recognition. Shining a harsh light on this complicated duality, which can work as both poison and cure, they question how it is composed. The duality of this game, which presents itself as free of rules, and yet requires (in order to gain a certain type of recognition) one to enhance the dominant language of the game itself—its rules and patterns—thereby elevates those who have played this game historically.

The right of return, part of a UN resolution in December 1948, states that Palestinians have the right to return to their homes. Qi contemplates this theme: the impossibility of its practice and the duality between the resolution and its failure, seen practically. To move freely, to displace yourself for more than a couple hundred kilometres without being stopped by checkpoints, is impossible in everyday life in Palestine.

A multimedia exhibition, proposed by RIWAQ center, presents a video with testimony of the destruction of the Ottoman Clock, which had been constructed in Jerusalem under Ottoman rule and stood atop Jaffa Gate until it was destroyed by the British. Together with a small-scale model of the clock and of Jaffa Gate, the video combines the conquest of Jerusalem—“marking the end of the Crusades”—with the destruction of the tower by British commander Edmund Allenby. The memoirs of Wasif Jawhariyyeh expose us to monumental attempts to erase memory, both past and present.

In the exhibition “O Whale, Don’t Swallow Our Moon”, Jumana Emil Abboud poses a question to God: “How difficult was it for you to split the ocean for Moses? To divide the waters into two?” Here she questions not only the historical facts of Exodus but also the sea as a path to glory, a path towards freedom as used in 1982 by the Palestine Liberation Organization—or lately by emigrants escaping wars.

So by reclaiming the sea, one also reclaims the air and the land, the old airport and the new city, now ruins without reconstruction. Thus one claims that appearances are not reality, that entrenched within the myths are discourses demanding cold analysis, and that even today, this region holds an open-air cage.

Qalandia International proposes above all the need for remembrance, for an analysis of what is still occurring, for an attempt to build a non-hegemonic biennial. It offers an example of what, concretely, an art exhibition can propose politically. 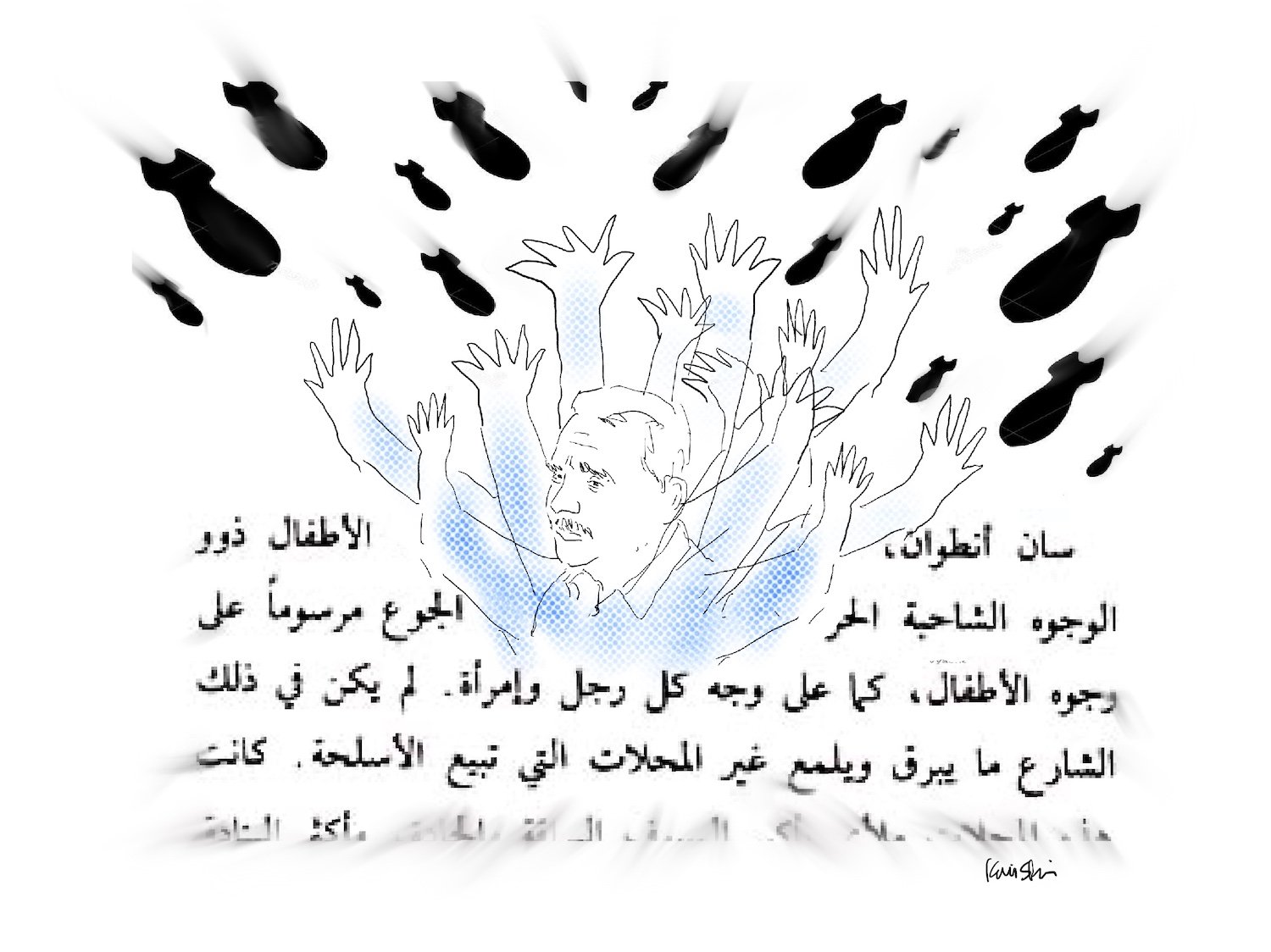 We Liked the Way He Moved: A Presentation at the International AIDS Conference

By Pato Hebert and Ajamu