YANGON, MYANMAR—I was awoken at 7:00 am on February 1st, 2021 by my wife Haymar and her younger sister whispering that the internet and phone lines had been disconnected. My sister-in-law had been staying with us in a small, rental apartment in the capital city. I was out picking up some breakfast snacks for everyone at Nya Zay market, when I overheard some shopkeepers saying that the military had taken over the government early that morning and arrested President U-Win Myint and “Mother Suu,” as the shopkeepers referred to State Chancellor and Nobel Peace Prize laureate Daw Aung San Suu Kyi. When the internet connection came back on around 9am, my phone was flooded with messages from friends outside Myanmar warning me that there had been a coup.

We later discovered that in the early morning hours of February 1st, General Min Aung Hlaing, Joint Chief of the Burmese Armed Forces (Tatmadaw) ordered troops to occupy the parliament residence quarter, where newly-elected Members of Parliament were sleeping. He ordered the arrests of dozens of ministers and party leaders from the National League for Democracy (NLD), as well as prominent activists and artists throughout the city. At 9am, just as I was reading texts from friends outside Myanmar, General Hlaing unilaterally announced a yearlong State of Emergency. I whispered to myself: “Oh fuck, another ’88 is coming.”

Haymar and I were born in the 1990s. Our generation had been taught the histories of 1962, 1988, and 1991 coups, but we weren’t prepared to respond. On February 1st, Haymar, then three months pregnant, marked her 30th birthday. One friend bravely showed up. It turn out to be a day we would never be able to forget. Instinct told me to withdraw all the money from our bank account from the ATM nearby, which proved wise because it soon became nearly impossible to access money.

The nation was in a collective state of shock. No one expected that an event like this could occur after ten years of transitioning towards an albeit limited democracy. Before the coup, my wife and I had been living in Rakhine State for the previous two years, working with civilian aid organizations responding to the 2017 Rohingya humanitarian crisis. We’d left behind our chaotic lives in Myanmar’s most socially and politically unstable region and moved to the capital Yangon, expecting to settle into a cozy, urban life. Instead, we had found ourselves targets of a military insurgency.

On February 2nd, the nation erupted in a din of iron and brass and stainless steel as protesters flooded the streets in a mass “pot banging” ceremony aimed at mobilizing public resistance. Traditionally, “banging the pot” is believed to drive out evil spirits. That night at around 8pm—at precisely the moment that my wife, sister-in-law, and I were discussing how our neighbours might respond to us banging pots in our apartment—a deafening, metallic explosion echoed down our street. We ran out to the balcony and couldn’t believe our eyes: the streets were full of people, everyone was holding a pot, and it felt like the entire world was making noise. Where there had been silence and fear was now a scene of solidarity and opposition to the military coup. I can still hear the banging pots in my mind.

The coup was particularly difficult on civil servants, who found themselves forced to engage in subversive forms of civil disobedience. Teachers, doctors, bus drivers, civil administrators, and bank employees refused to work, sacrificing their futures to march in the streets. Two days later, a wave of protesters led by female industry workers from the outskirts of Yangon descended on Heldan Square, one of city’s busiest junctions. Their courage and brazen act of dissent sparked protests in every city and village across Myanmar, catalyzing millions to take to the streets. Demonstrators shut down traffic. Revolutionary slogans were draped across buildings. For three weeks the architecture of Yangon was a canvas for the resistance movement.

In mid-February, a brutal crackdown by the military culminated with mass arrests and clandestine murders of demonstrators. But it did little to quell the demonstrations. On March 27th, 2021, the military escalated the violence. Hundreds of protesters were massacred in major cities across the country in a single day. Approximately 80 people were killed in Pegu. 30 people were killed in Kalay. And countless others were targeted and murdered in Yangon and small towns. The urban resistance movement was forced to go underground as war broke out between the military and armed ethnic militias across the country, who had been fighting the Tatmadaw for decades.

During these chaotic weeks, my wife and I spent our time mobilizing our cell and responding to the political turmoil to support the resistance. At the time, my wife was involved with a group called Yone Htwet Soe! (“Let’s get out of the darkness”), which provided financial support to civil servants participating in the civil disobedience movement. I was involved in organizing protests outside Yangon until mid-March, when it became necessary to focus our energy on urban resistance within Yangon. Our world changed on April 26th, when most of our network were arrested in Pago, an hour north of Yangon. Our cover was breached; we couldn’t go back to the city. Among those arrested were Ar-ker and BK, my closest friends.

At that time, we were in my wife’s hometown Thaton, not far from Myawaddy, which has a border crossing to Thailand. When Ko Thint, a fellow activist and supporter of our group, called me the following morning and confirmed the news, he told me: “I’m running and you should too.” I knew it was risky, but the gravity of the news—the fear I felt for my brothers—filled me with terror.

We had two options. The first was to migrate to liberated areas along the border controlled by ethnic militias, primarily the Karen State Army. Many people targeted by the military made this choice. The second option was the clandestine route into Thailand. We choose to leave our country in large part because my wife was nearly eight-months pregnant at the time and there were no adequate medical facilities in the jungle. We contacted our network and found a way to cross the border with the help of an old colleague we knew from our work years before with the Rohingya in Rakhine State. She put us in touch with an activist, Mya Nandar Thint, who ultimately orchestrated our escape.

On 29th April 2021, we left Haymar’s hometown and drove to Pha-An. Mya arranged for a man and woman to meet us at a secure location in town, and then drive us to a safe house in Myawaddy, a town on the Myanmar side of the border. There we met many politicians and activists whose lives were in imminent danger. We stayed only one night. Later we would discover that our driver, an amputee who had lost her leg to a landmine, was arrested two months later for helping people like us escape.

We left the safe house the following afternoon and were driven the short distance to the border, which is basically a narrow river, on two motorcycles. We got in a boat that was attached to the Thai side of the river by a rope and were pulled across to the other side. An older woman escorted us to the Border Guard Force (BGF) base located in the no-man’s-land between Myanmar and Thailand. Although the BGF is officially affiliated with Myanmar’s military, their primary interest is profiting off human trafficking, illegal casino operations, illicit cross-border trade, and kickbacks for looking the other way while people like Haymar and I escape political violence.

As we approached the base, our elderly escort coached us how to act like locals and instructed us walk to the Thai police checkpoint with a group of small children. We were terrified at this point. If we got caught, the consequences were unthinkable.

Fortune smiled on us in the form of a deluge of rain that suddenly shut down the police checkpoint, giving us a window to cross the unguarded border. Once safely on Thai soil, we quickly made our way to a side road where a taxi was waiting to pick us up and drive us to the boss, a skinny middle-aged man who soon began arranging our next move. We paid him $10,000 baht ($265 USD) and he handed me a “police card,” which is basically a receipt proving that we’d paid off the police. We were told to show the card to any Thai police officer if we got stopped, and we’d be let go. We were then driven to another safe house in a small tuk tuk. The safe house turned out to be Mya’s home.

We spent two months in Mya’s safe house. There was nothing to do but stay inside and help with household chores while we waited on Haymar’s American friend to convey our situation to their contact at the US Embassy. It took seven weeks, but the US Embassy was able to broker a meeting for us with Thai Intelligence to tell our story. A couple days after that meeting, a US Embassy van picked us up and drove us and 13 others to Bangkok, where we spent three days waiting to obtain parole visas to enter the U.S. On June 15th, 2021, we flew from Bangkok to Boston, and then to Indianapolis, one of the largest communities of exiled Burmese in the United States. Ten days later, Haymar gave birth to Tsawm, our baby girl. She is an American citizen.

Our decision to leave Myanmar meant we had to abandon our lives, our professions, families, friends, and our communities. It’s uncertain if or when we can ever go back. We never imagined ourselves escaping from Myanmar or seeking asylum in Thailand or the United States. It has been more than a year now…we have so many people to thank for helping our family on this journey.

But the coup leader Min Aung Hlaing is still in power and terrorizing people across the country. War between the military and newly formed civilian militias, known as People’s Defense Forces, are taking place in many parts of the country. My two friends Ar-ker and BK were sentenced to three years in jail. Our amputee driver was sentenced to eight years in prison. My friend, Ko Thint, is in Karen State where anti-junta resistance is strong along the northern Thai border. Mya arrived in New York three months after we left Thailand. More refugees from Myanmar keep coming to Thailand legally and illegally, and it’s gotten much harder for them to stay there. This summer, the military sentenced four democracy activists, including a well-known politician, to the death penalty. Our dream to return home to Myanmar is slowly fading away.

Editor’s note: The illustrator prefers to remain anonymous for reasons of personal safety. 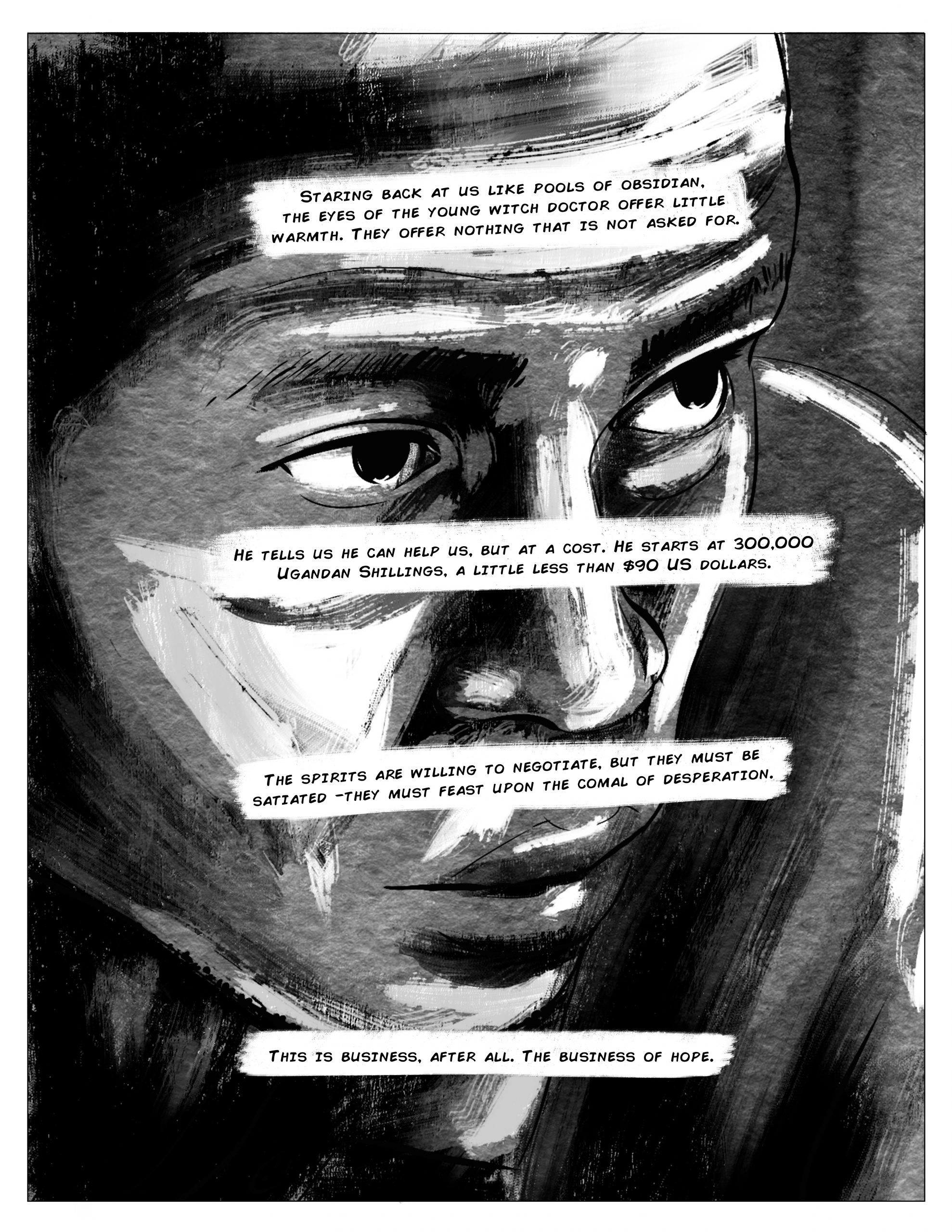