A review of Sarah Schulman’s The Gentrification of the Mind: Witness to a Lost Generation

I came out to my friends as an impulsive, drain-chain-wearing sixteen-year-old. I knew little about the Gay Liberation movement or the queer community. Instead, I met a cute punk on a Toronto streetcar and felt a familiar stab of desire in my gut. When he casually mentioned being gay, my closeted heart ruptured; I had never met an openly gay guy my own age before. Within hours, I went from straight-faced denial to card-carrying homo-identified. Two months later, Streetcar Punk and I started dating. While it was sweet, I was oblivious to the blood, sweat, and bile that had laid the foundation for this relatively placid sexual outing of mine.

It was the year 1999 and I lived in a well-to-do part of Toronto with a semi-tolerant social network of self-absorbed neoliberals, financially stable hippies and well-educated immigrants, and their respective broods. In the grand scheme of youth who have come out worldwide, I wasn’t in the worst place. Most of my friends reacted to my coming-out with benign confusion or vague disinterest. There was one comment, though, that for years after defined how I thought of my sexuality. I called a friend one evening to tell her that I was gay. There was a heavy pause, then she asked, “but what about AIDS?” What about AIDS? I thought to myself.

My first encounter with HIV/AIDS was on the news. Then it was a good friend of mine whose family moved into an apartment previously occupied by a gay couple, one of whom had recently died of the virus. I remember visiting the unit and being afraid that I might be infected if I touched the wallpaper. I saw AIDS as ultimate culpability: something that a certain kind of person brought on themselves. In that way, I wanted to distance myself from those gay men whose apartment my friend was assuming. But with the question “what about AIDS?” came the realization that I was inheriting an epidemic of which I knew nothing, had no obvious part in, but was still in some way responsible for. And so, the shadow of AIDS hung over my bed for years, threatening to make an example of me, as it had so many men before. 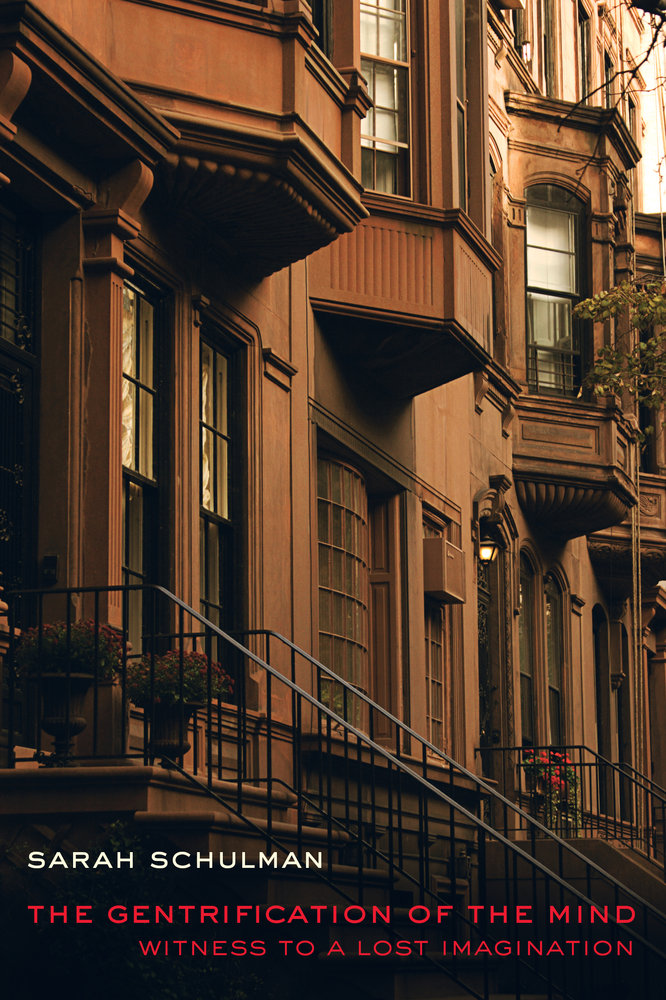 Flash forward to me as an openly queer thirty-two-year-old writer, recovering actor, and environmentalist. I live in my grandmother’s house with my partner, sister, four cats, a dog, a whack of houseplants and until a few months ago, my grandmother (she elected to move out). I’m not gainfully employed (by Toronto standards) and I’m not monogamous (by straight standards). I’m also not starving or having my ass kicked or bleeding out in a hospital lobby. Still, I feel a perennial darkness; a nagging chip-off-my-shoulder that’s queer but hard to quantify. I feel angry and sad and lost a lot more than most of my straight friends do. I often feel like an integral piece of myself doesn’t exist; a piece that should be interwoven with the rest of me. So, what’s missing? I wonder if the answer lies, at least in part, in a 2012 book by Sarah Schulman, The Gentrification of the Mind: Witness to a Lost Generation. (Buy the book from the University of California Press.)

This book, a memoir-cum-critical history – important reading for anyone with even a vague interest in American history (and urgent reading for queers who weren’t on the scene during the AIDS epidemic) – connects the physical process of urban gentrification with a subtle but insidious spiritual transformation. Schulman describes how city policy in conjunction with the AIDS crisis led to the rapid gentrification of major US cities. As luxury development was incentivized over the construction of lower-income housing, living options for anyone but the ultra-wealthy narrowed.

In the 1980s and into the 90s, eminently queer neighbourhoods in cities like New York gentrified before its residents’ eyes. As scores of gay men died in their rent-controlled apartments, their lovers were evicted and rent prices were raised to market value. Meanwhile, higher income, heterosexual suburbanites with a taste for city-life, began to occupy these spaces, imposing their cultural aesthetic on the neighbourhoods. This period wasn’t just apocalyptic for queers, it was also devastating for the many immigrants and lower income folk who lived in these areas, which went from being affordable hotbeds of cultural difference, creative thought, and social change, to become overpriced urban malls, where public cruising was outlawed. Worst of all, the memory of who had been there before was paved over, completing a phase of sanitization. Schulman characterizes gentrification as “the removal of the dynamic mix that defines urbanity — the familiar interaction of different kinds of people creating ideas together.” This echoes a broader form of homogenization happening worldwide, whereby a reduction of biodiversity is weakening global ecosystems. Arguably, queer communities are similarly an important piece in the natural order of society.

Schulman describes how gentrification obliterated a generation of American gay culture. She explains how the course of the AIDS epidemic came to be naturalized in public discourse, as though society had reacted appropriately over time to an unfortunate but accidental cataclysm. Of course, this is not what happened, as she deftly and thoroughly argues. What really strikes a chord with me, though, is her suggestion that gentrification disconnected LGBTQ2+ youth of today from the seminal parts of the movement. Schulman argues that without an intrinsic understanding of how AIDS changed the queer landscape, young queers have internalized the idea that things are good enough (perhaps, save marriage equality). This ideology, which exemplifies Schulman’s concept of a gentrified mental outlook, has led a de-radicalization of gay culture in which young queers adopt mainstream, “homonationalist” values, and in which Schulman argues that, “homosexuality loses its transformative potential and strives instead to be banal.” With this is mind, I wonder to myself: is my queer consciousness a gentrified one?

The Gentrification of the Mind is best read as a highly informative and thought provoking polemic. What Schulman offers is a firsthand account of the AIDS epidemic from the point-of-view of a prolific lesbian AIDS activist who lived in Manhattan’s East Village during the crisis. Written in two sections, the book explores first what the AIDS crisis looked like at its worst and how gentrification unfolded during that period. In the second section, she explores the impacts of gentrification on cities, the LGBTQ2+ community, and American culture more broadly. As a novelist, playwright and Distinguished Professor of English at The College of Staten Island, Schulman provides brilliant insight into the ways that gentrification has shaped American literature and theatre. Throughout the book, Schulman injects little memorializations of both famous and lesser known members of the queer community who were either lost to AIDS or forgotten in its wake. These memorializations are important both in terms of introducing readers to specific members of the lost generation but also as a way of personalizing the epidemic.

While the book is an accessible read, it’s not hugely sympathetic to the readers who might benefit most from it. Describing an ACT-UP meeting in which young New York queers were invited to intermingle with surviving ACT-UP activists, Schulman observes that the young queers, “had never been . . . profoundly oppressed. . . . Also, they had never been that inspired, that inventive or that effective [as members of her generation had].” While I appreciate her point-of-view, I disagree. Many young queers have come from overtly oppressive backgrounds. Think: refugees from parts of the world where violent homophobia is legally institutionalized. While newer generations of dykes, fags, queers & queens haven’t had a beast like the AIDS crisis to cut their teeth on, we don’t necessarily lack inspiration or inventiveness or the experience of effecting change. Many of us are grappling as best we can with navigating a complex era, in which, as Schulman astutely points out, we’re told that, “things are better than they are.” We’re also struggling to locate meaning and enjoy some of the freedoms that her generation afforded us.

So, as I lie awake in bed, with my boyfriend by my side, I wonder to myself why I feel so lost. Gary and I have created a home together, where we’re safe to express ourselves and have forays with ours’ and others’ bodies. But beyond our walls – walls that we’ve lovingly adopted from my grandmother without updating the wallpaper – is a city that believes itself to be a beacon of plurality. And yet, queer subjectivity still seems framed by straight, capitalist ideals. I consistently grapple with feelings of failure because I bottomed-out as an actor before I really got going. In retrospect, I was scared to be pigeonholed as a gay actor and so, I fought for, and became disillusioned with, straight roles that I couldn’t relate to or, frankly, found boring. Throughout my twenties, I closeted myself in a variety of inadvertent ways and resisted a more open and active sexuality because I was terrified of a disease that I felt deserving of getting because I was living unnaturally.

June 5th, 2016 was the thirty-year anniversary of what is considered by many to be the first recorded diagnosis of HIV/AIDS in North America.[1] We’ve come a long way. There’s ART therapy and PrEP (the name for AIDS therapy drug Truvada when used as an HIV preventative) and a legacy of powerful activism left by ACT UP, wonderfully portrayed in the Oral History Project, which Schulman was a central part of. I wonder though, if in our feelings of gratitude, we’ve forgotten to feel entitled to something greater.