The adjacent garden—the ‘garden with no name at the crossroads of two streets’—has now been christened Giardino Ammirato after the Renaissance philosopher Scipione Ammirato who lived in the structure. Giardino Ammirato is an expression of the group’s desire to reclaim a forgotten space and collaboratively reinvent it for communal and convivial use—and, of course, to be admired.

In its current state, the garden is a problematic space, abandoned despite its historical, social, and environmental value as one of the few green areas in Lecce. It is located in a neighbourhood that lacks a coherent identity, accessed only for its services with few social spaces—it’s declared “dead” by its own inhabitants.

[pullquote]Giardino Ammirato is an expression of the group’s desire to reclaim a forgotten space and collaboratively reinvent it for communal and convivial use—and, of course, to be admired.[/pullquote]In the past, we at Free Home University and Ammirato Culture House have attempted to take care of the garden in subtle, relational ways that avoid appropriating the space for private use. We attempted to restitute it with the community by suggesting possibilities for its use. Despite our seasonal cleaning, programming, planting, dancing, and various gatherings, our actions were never sustained and very soon the garden returned to its state of neglect—used only by dogs and their owners and a few young people. Passers-by often complained that the garden is dirty and unsafe, and that they would avoid spending time there or bringing their children to play.

In addition, after four years of occupying the Ammirato Culture House, we wanted to increase the presence and participation of neighbours in the house activities. There was a perception of the house—an enclosed space—that it is private. This perception persisted despite our vision of the Ammirato Culture House as a free, open, convivial place—a house for all—and our curatorial approach that encourages spontaneous activities, collaborative social practices, and synergistic methodologies of working and living together. The 16th-century fortified architecture that houses the organization overpowered our vision, will, and desire, despite its monumental beauty and uniqueness in a newly developed neighbourhood.

With these challenges in mind, Free Home University invited Constructlab, a group of mutually interested artists, designers, and architects, to collaborate with us to reimagine the courtyard and garden. Constructlab works with an open yet defined methodology; they enter spaces by articulating a protocol in which group decisions are based on reactions to the particular needs of a space. Through this process, an initial idea is visualized, and through a series of construction experiments and workshops, the design slowly builds as disparate, self-organized components come together. Passersby join the group and add their own ideas.

Giardino Ammirato is the platform—with a very hands-on approach and a practice/theory/reflective mode—through which we explore the possibilities to re-imagine a space collectively. Focusing on the existing qualities of the building, the architectural interventions use scaffold-like structures along both sides of the courtyard wall as spaces where activities can take place simultaneously inside and outside the Ammirato Culture House. The objective is to create a platform of interconnected initiatives that animate the space and form part of the cultural program of the Ammirato Culture House.

Filmmaker Eliana Manca created this 17 minute documentary that traces the creation of ConstructLab’s augmentation of the space, and the resulting community engagement with the gardens:

The following photos show how Giardino Ammirato is taking shape as the Spring Session of Free Home University approaches its conclusion.

(Participants are listed at the bottom of this post.) 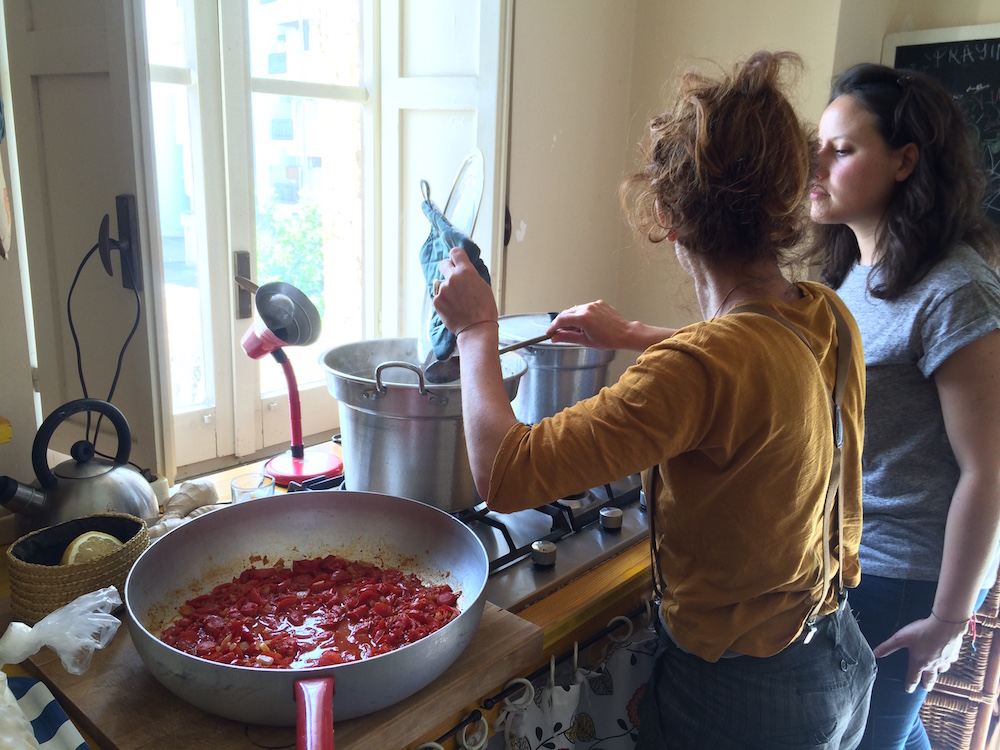 Marcella (Lecce) and Carla (Mexico) cook together in the kitchen at the Ammirato Culture House. Marcella is the live-in coordinator at ACH.

Fara, Blacka Lamin, Sadick, Sadak, and Moussa from the Arcobaleno Center for Refugees and Asylum Seekers joined Free Home University in May 2016. They are forming a core local participants’ group with ongoing programming at the Ammirato Culture House.

Daniela Brasil (Rio de Janeiro/Graz) works between the fields of art and urbanism; with artistic and spatial practices that focus on horizontal and emotional forms of exchanging knowledge and know-how; unlearning hegemonic/western thoughts, behaviors and representations.

Raphael Daibert (Minas Gerais/São Paulo) is a gay human rights and ‘right to the city’ activist, researcher, and cultural producer with Lanchonete.org and Queer City.

Mascha Fehse (Berlin) is a student at the faculty of architecture at Berlin University of the Arts and a frequent worker with Constructlab.

Patrick Hubmann (Berlin) is a designer and artisan with ConstructLab, a collaborative construction practice working on both ephemeral and permanent projects.

Federica Menin & Laura Lovatel (Venice) began their research collaboration as students of Visual Arts at the IUAV University in Venice, focusing on issues related to space, the city, its surroundings, and ecology.

Alessandra Pomarico (Lecce & New York) is a curator of international and multidisciplinary artists’ residency programs at the intersection of arts, pedagogy, social issues, nano-politics, and the poetic of relationship in community building, including Ammirato Culture House and Free Home University.

Alexander Römer (Berlin) is a founder of ConstructLab, a collaborative construction practice working on both ephemeral and permanent projects.

Daniela Sanchez (Havana, Madrid, Miami, Utrecht) sometimes calls herself a geographer. She spends a lot of time thinking about Lefebvre and the production of space, diverse societies, and the dynamics of power.

Elisa Saturno (Milan) is a student of Interior Design at Politecnico di Milano and a collaborator with Esterni, a cultural enterprise that designs public spaces and services for communities.

Sébastien Tripod (Lausanne) is searching for an architecture recognizing the importance of the imaginary, intuition as a reason and the act of building as a fluid part of the architectural object.

Shawn Van Sluys (Guelph & Toronto) is the Executive Director of Musagetes, and the chief editor of ArtsEverywhere, and a co-curator with Alessandra Pomarico of the 2016 Free Home University sessions.

Mavi Veloso (Pacaembu, Brazil/Brussels) is a transdisciplinry performer in film, dance, music, theatre, and circus, including a lead role in The Get Up and The Pink Color. Her current project is I Wanna Make Revolution, a multimedia project on displacements, mutant, and in-transit bodies.

Peter Zuiderwijk (The Hague) is a designer who specializes in research-based design. Together with Karin Mientjes he runs the collaborative work-structure “Collective Works.”