The Fierce Urgency of Now has a unique structure: a long prelude followed by an introduction, six chapters, and a coda. Echoing improvisational musicking, with the hope to surpass individual, perspectival limitations, and reach “new methodologies paradigms,”[1] Fischlin, Heble and Lipsitz take upon themselves here the challenge of collaborative writing. While both the topics and the tactics of investigation may sound compelling, the endeavor as an object for contemplation, unfortunately left me wanting. The authors claim a marriage between theory and practice,[2] but the book is structured around purely academic conventions where the thesis is stated, then repeatedly demonstrated by quoting others and providing examples to full depletion. These excessive quotations not only present a cacophony of voices, but also read as an extreme version of traditional academic labor, one that rapidly recycles ideas without challenging the form.

Or perhaps, I am not used to sampled dissonance.

It may be useful to ask, then, what is the thing that is absent from the book. This may help us to continue this important conversation regarding the relationship between music and civic agency through the power of improvisation despite the shortfall that is presented here.

The book tracks the history of American Jazz music with the history of slavery, oppression, institutional neglect and censorship. Diving into the nucleus of improvisational jazz, the authors highlight its structure as evolving from a communal condition through active participation — a structure that requires equally skillful listening and quick, creative response. This, together with the genre being the outcome of a continuous unanticipated progression, provides the authors the ground to recognize in improvisation a vital metaphor for human rights discourses. One of the book’s acute ambitions then is to find an echo of the improvisational decision-making process in music in the realm of civic activism. 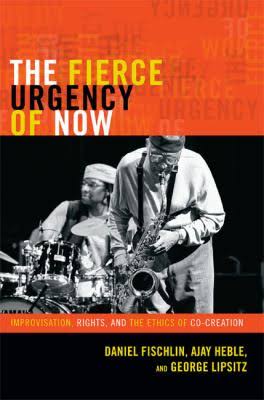 A strong anchor for the presented thesis is the focus on two famous jazz collectives of the 1960s, the UGMAA and the AACM;[3] two nonprofit organizations designed with a strong communal and educational agenda in response to the void of cultural expressions of African American heritage. They also promoted local artists and owned independent labels, which created a rare situation in the American cultural landscape at that time: African American ownership over its own voice and image.[4] Members from both the AACM and the UGMAA articulated on different occasions a deep link between improvisational music production and communal responsibility,[5] cementing jazz as a successful metaphor for active citizenship. Based on this link, the authors assert that the act of participation in improvisational jazz creates, both for the musicians and listeners, a productive simulation for civic action:

The core elements of the most achieved improvisers include careful listening, embodied presence, dialogue (even if dissonant and dissident), relational thinking, empathic and intuitive understanding blended with the skillful use of material at hand, and the power to awaken others to new possibilities in the improvised soundscape. The qualities required to be instrumental in improvisatory circumstances are also the qualities that underline rights contingencies. And this relation to the rights contingencies is especially evident in the ways difference and otherness (both in relation to one’s self but also in relation to the others that give that self meaning) are a constant reality of improvisation.[6]

This analogous relationship between improvisational music and rights contingencies condenses the essence of the book. Despite the authors’ claim to go to transformational territories[7] the book does not provide any other relationship between the two practices beyond comparison,[8] as illustrated here by three case studies.

First, in analyzing Don Pullen’s 1995 album Common Grounds, the authors highlight the recording being a result of a multinational collaboration between Afro-Brazilian and Native American musicians, juxtaposed with free jazz and gospel. They write “…the two groups had to learn cocreatively to accommodate the complexities of each other’s styles as the music evolved […]” However, they do not provide any specific description regarding how the groups learned to accommodate complexities “cocreatively.” In fact, they fail to define “cocreative” practices. While remarking that “the project unfolded not without tensions over traditional native culture’s being “improvised,” they do not specify the indispensable details regarding the tensions and their resolution, missing the opportunity to deepen our understanding of improvisation and co-creative practices in a civic context.

Second, when discussing Malcolm X’s unique style of public speaking, where he “provoked laughter and applause through playful interactions with listeners, sudden and unexpected changes in register and tone,” the authors argue that he “displayed all the skills of an expert improviser” (emphasis added). Following historian Robin Kelly, they write that Malcolm X achieved these skills because earlier in his life he “danced to the music of swing bands, wore zoot suits, and mastered street slang and verbal performance.”[9] The conclusion of this study case infers that Malcolm X achieved improvisational skills because of previous experience, meaning he learned them. This not only employs “improvisation” as a symbolic representation, but it also blurs the distinction between the term and mere learned experience, summarily diluting it.

Third, when writing about the aftermath of Hurricane Katrina, the authors state the political system of New Orleans missed the opportunity to “improvisationally” utilize the black youth, the account of the local activist and cultural worker Jerome Smith demonstrated otherwise. The authors write: “He saw young men, commonly viewed as criminals and thugs by the city’s ruling elite, repeatedly performing brave acts of love… From Smith’s perspective, the same skills that served these young men in their lives on the street were put to good use in the crisis.”[10] Here again, improvisation is compared with learned experience, but I can’t help but believe it is much, much more.

The truth is the authors fail to analyze the magic of improvisation. Going back to their definitions of improvisation, they list “careful listening, embodied presence, dialogue, relational thinking, empathic and intuitive understanding” as necessary qualities for successful improvisation.[11] However, while understanding that there is a necessity to learn, meaning to create a learning process of, let’s say, listening,[12] the authors do not bother to dive in to the complexities and practices of listening. Same goes for embodied presence, relational thinking and so on. Improvisation still awaits to be mapped.

[1] Fischlin, et al., The Fierce Urgency of Now: Improvisation, Rights, and the Ethics of Co-creation. p. xii
[2] Ibid., p. 192
[3] The Los Angeles-based Union of God’s Musicians and Artists Ascension, and the Chicago-based Association for the Advancement of Creative Musicians.
[4] Ibid., p. 44
[5] More noted are the words of the founder of UGMAA, Horace Tapscott: “I get inspired for my sounds from the people… Improvisation is in my music because it expresses what happens in the community.” (Ibid., p. 47) Joseph Jarman, one of the first members of AACM, also described a similar approach in a 1969 interview, in which he responded to the social struggles of African Americans: “the music is a response to these: that means that when people hear it, they can experience a reaction to these problems. Thanks to the music, they can in turn become more active and more responsible.” (qtd. by Lewis, Power, p. 231, Ibid., p. 55)
[6] Ibid., p. 71
[7] The authors evoke a term used by the musician and music theoretician Stephan Nachmanovitch, Ubuntu. Ubuntu is a South African word that “means ‘I have my being through your having your being.’ Ubuntu is the territory we go into as we do our improvisational explorations.” (Quoted from The Improvisor, Ibid., p. 64)
[8] Wynton Marsalis, artistic director of Jazz at Lincoln Center in New York City argues: “Jazz music is a conversation, and that’s what you need in democracy. You have to be willing to hear another person’s point of view and respond to it […] The connection between jazz and the American experience is profound […] and that’s why the fact that it has not been addressed has resulted in our losing a large portion of our identity as Americans.  Because the art form that really gives us a mythic representation of our society has not been taught to the public.” (qtd, in Goodheart, part 1, Ibid., p. 120, emphasis added).
[9] Ibid., p. 151
[10] Ibid., p. 183 This reading, of “young men“ that are “commonly viewed as criminal and thugs by the city’s ruling elite” (all the city’s elite?!), putting the skills they acquired “on the street” into use in a moment of crisis, is troublesome. It is troublesome because it infers on a productive relationship between hardship and bravery, in this it is both romanticizes the relationship and undermines it.
[11] Ibid., p. 71
[12] Ibid., p. 23