An event called Queer City is, per se, an invitation to inhabit the oxymoron as an epistemological position.

Can a queer city exist?

Who would be the good queer citizen?

Mavi asks a spectator to help her close her necklace.
Michelle draws a square made of sugar on the floor, her back towards us.

At the core of the ongoing colonial project, the city founded a sexual and racial surveillance system that shaped the social body according to the European rationality. The grid of the urban planner articulates the systematization of knowledge(s) and the regulation of time, while normalizing bodies and determining their circulation. This heterowhite engineering distinguishes different forms of belonging and citizenship, distributing safety and punishment, reproduction and death.

Michelle stares at us while she takes the needles from her face. She’s bleeding.
Mavi bites the apple, spits it out. She swallows the chewed pieces.

In the peak of the AIDS plague, Queer Nation, a group of sexual dissidents and activists, imagined another type of city, “a city of yearning and total satisfaction. A city and a country where we can be safe and free and more.” Although this radical utopia “is not about the mainstream, profit margin, patriotism (…) or being assimilated,”[1] it seems that in the last three decades their political grammar has been co-opted by neoliberalism. If the dream of a queer society failed, how can we think about the relationship between queerness and the contemporary city? Must these inappropriate subjectivities and bodies take over the city or strive to abolish it?

The same could be said about the museum. AMOQA (Athens Museum Of Queer Art) is “an hybrid space for the research and promotion of arts and studies on sexuality and gender,”[2] an archive of Greek LGBTQI+ movements and a meeting point for transnational queer manifestations. On the 21st of May, it hosted the screening of a documentary about the Brazilian-based collective project Cidade Queer. Jota Mombaça, the curator of this event, established a dialogue between Danila Bustamante’s film and two performances: Experiencing the flooding red II, by Michelle Mattiuzzi, and Mavi Veloso’s QUASE SHOW.

Michelle Mattiuzzi’s work draws on anti-(cis)tem postporn practices and black anti-colonial resistance. Her performances are the result of an embodied research process in which the act of performing is, in itself, a laboratory where to explore the tensions between pain, power and history.

In Experiencing the flooding red II, she reaches an altered state of consciousness through ritualism and extreme performance art: the self-infliction of violence invokes the ancestral anger inscribed in her body, exposing the daily struggle of black women. Despite the illusion of safety given by the art scene, the blood is present. Thus, to put it in Mombaça’s words, it enables a redistribution of violence and ruins the white audience’s ontological comfort.[4] The use of sugar and dendê oil opens her haunting archive, unfolding the colonial extractivism which identifies her body as another natural resource.

Just before Mattiuzzi comes into scene, we hear a pagode sound. The rhythm is composed by PaguFunk, a band of women from the periphery of Brazil who are rescuing a popular tradition “historically marginalized and misrepresented by the dominant capitalist classes.”[5] Even though this is a solo performance, the artist is backed up by a transfeminist and anti-whiteness network sustained by affective alliances.

Dancing on high hills over the white gold, her contained movements frustrate our expectations. Mattiuzzi knows that she carries a hyper-sexualised corporeality, which her gestures sabotage. When crouching, it feels like she could fall. The artist doesn’t hide her vulnerability, a gesture that reveals the precarious conditions in which she develops her work. Failure is a possibility. Talking with Mattiuzzi, she tells us that the dendê oil is used as a protector in certain rites of passage. When she smears the oil all over her body, she is highlighting the asymmetric power relations which sustain the implicit pact between performer and audience.

At one point she piles up the sugar obsessively, embracing its historico-political load. In contrast with the utilitarian Western performer, who has all the world at his disposition, Mattiuzzi understands that the materials of her performances conform her somateque. She dips her face in the sugar mountain, drawing a white mask. As in her previous performance, “Merci beaucoup, blanco!”[6] Mattiuzzi subverts the blackface technique to show how race is a one-way road. With this gesture, she points out the fact that a body like hers, actively occupying an art space, is an exception.

Almost human, almost pervert, almost in love, almost a happy soul.
The woman to come, the male between, transgressive asshole, caressing us all

Mavi Veloso’s musical performance sketches another kind of community and, in fact, the work she presented emerged from a collective creative dialogue. Originally conceptualized together with Caio “during coffee and cigarette conversations in Brussels,” QUASE SHOW‘s shape responds to Veloso’s transit and alliances between Brazil and Europe. If in São Paulo they were joined by Gabi Venzetta and María Tereza Próspero, in Athens she “assumes temporally some solo constructions, personal narratives, incursions and experiments.” The title of the multidisciplinary project which framed the show, #iwannamakerevolution, moves us to a different mood, and the performative grammar of QUASE SHOW relocates us into another setting. While in Experiencing the flooding red II we were the voyeurs of a ritualistic scene, Veloso invites us to assume our role as witnesses of a spectacle.

She gets undressed in front of us (but not for us) and starts her prayer: “Dear mother, this body is a sacred place in any ways (…) I still don’t know which way to go, don’t know how many we are, know not which spaceship to take (…).” Veloso gets dressed, staggering, trying to fit the hanging wig on her head. The design of this device is doomed to fail, but failure operates here as an ironic and playful gesture.

The show goes on through original tracks and covers (Grace Jones, Hercules & Love Affair, Marc Ronson & the Business Intl…), in order to “appropriate other’s voices, listening and miming to gain and give voice.”[7] Right after, Veloso asks us to sing along with her:

The voice is one of the battlefields where the gender police is more persistent: divided in groups, we choose a pitch. Veloso shares a gender wisdom produced beyond the cis realm, throwing the question about the naturalness of the biopolitical binarism back to the audience. Too high or too low, the voice pitch can be a question of life and death. The performer keeps singing (“I’m in love with a man that I think doesn’t care much about my love. He’s my friend, we had sex some times”). She’s laying on the floor, frozen like a corpse: this is a crime scene. “Like a gun, I shot myself with his gun, he didn’t know it, he didn’t see it, he felt only a glance….” We draw the contours of her body, finding ourselves adopting the role of the cop. Nevertheless, the party is not over, and Veloso encourages us to keep dancing.

QUASE SHOW is almost ending. “Quase” stands for “almost” in Portuguese. With this title, Veloso implies the impossibility of fulfilling the normative gender ideals, an impossibility that has necropolitical effects for certain bodies. Although it’s hard to not let ourselves go along with the celebratory environment, we dance the last song acknowledging that transphobic violence is not an exception, but a direct effect of the binary cis-tem.

Todd Lanier Lester and Shawn Van Sluys, two of the founders of the Queer City project, defend an idea of queerness aligned with José Esteban Muñoz’s conceptualization: “Queerness is an aspiration towards the future. To be queer is to imagine better possible futures.”[9] Bustamante’s documentary insists on this optimistic vision, selecting joyful images and empowering speeches. The paradox, here, is that the city remains out of frame. On the other hand, Mombaça’s curatorial decision, locating the film between Mattiuzzi and Veloso’s performances, brings the whole discussion to an uncomfortable domain. Perhaps, in order to escape from the queer city oxymoron, we must pay attention to the way in which diasporic queer communities are overflowing the urban topos as the only horizon of possibilities. While the city sleeps, dissident geographies are disturbing its dreams.

[4] See: Jota Mombaça, “Fragment of Towards a Gender Disobedient and Anticolonial Redistribution of Violence”. http://www.nightschool.at/wp-content/uploads/2017/03/Fragment-of-Towards-a-gender-disobediente-and-anti-colonial-redistribution-of-violence.pdf 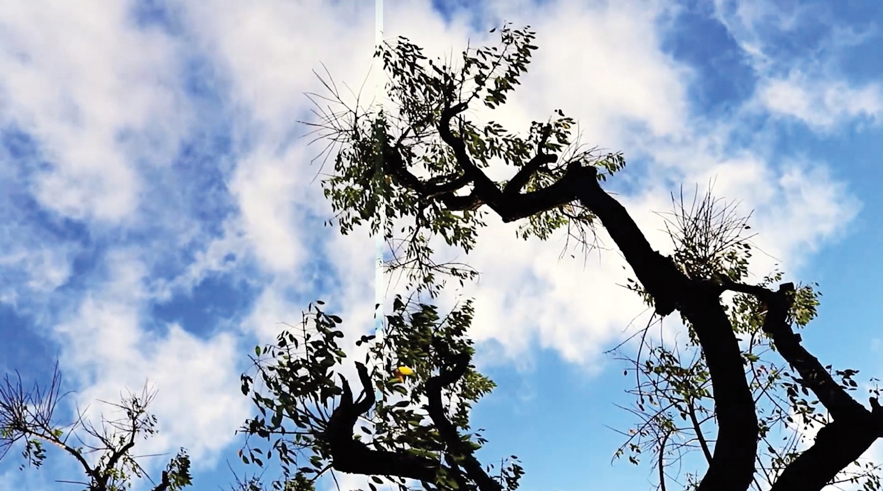 SOY PAISAJE (I AM LANDSCAPE) 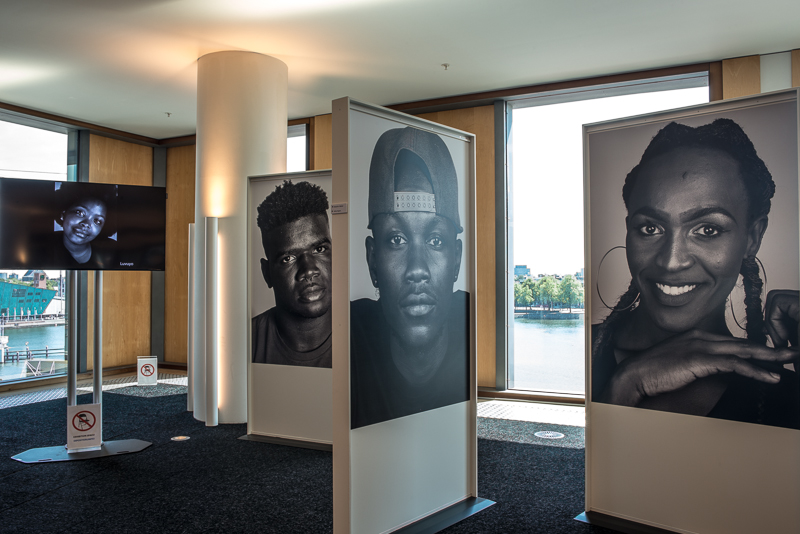