Over the course of Zhao Rongjie’s six-month Breathing 2021 project, she has collected and documented hundreds of species of fungi that grow near the sacred Buddhist temples on Jizu Mountain with Gong Jiaju, and local mushroom hunters Da Ge (Elder Brother) and Da Sao (Elder Sister-in-Law). She has photographed each species both in its natural state and as a negative image to reveal its unique spore structure. Many of these species have never been seen by outsiders.

At six o’clock in the morning the sky was still dark except for the thin marble glow on the horizon that indicated the skies should be clear and sunny today. This means we’re going up the mountain to pick mushrooms with Da Ge and Da Sao.

There are several different routes for mushroom hunting around Jizu Shan (Chicken Foot Mountain). Today, we decided to drive to Fangguang Temple and hike into the mountains from there. At eight o’clock, we arrived at the temple gates and decided it was best to split up into two teams: Jiaju and I on one team, Da Ge and Da Sao on the other. The place where they’re planning to go is far away, and there’s no way the two of us can keep up with them. Locals, like Da Ge and Da Sao, who climb these mountains often are said to “run the mountain”.

After saying goodbye, they soon disappeared and left Jiaju and me to climb slowly toward Taohuaqing Pass at an elevation of 2,700 meters. From the pass, there are four paths that lead into the mountains and each goes to a different place. When the weather gets bad, even locals can easily lose their way on the foggy mountain slopes. We chose to stick to areas where Da Ge and Da Sao had taken us before, and tried not to stray too far from the paths. The weather was sunny after the heavy rains two days ago, so we didn’t have to go far to find mushrooms. We had good luck today. We found several new species of fungi and saw a snail parasitized by mushroom fungi (bottom right).

As the sky grew dark around noon, the mountains became veiled in fog and there was a sudden heavy rain. By that time, we’d picked enough mushrooms and decided to head back to the tower courtyard, which wasn’t far away, and seek shelter from the storm. Inside this temple, there are several stone pagodas where monks and masters long since passed are buried.

Guarding the pagoda courtyard is a 72-year-old master monk named En Xin. He saw me walking into the tower yard soaked from the rain, and kind-heartedly laughed that I had gone out without checking the weather forecast. This was the third time I’d fled to his place to hide from the rain. Master En Xin has many stories, I will share them with you slowly someday when I have the opportunity…

*ArtsEverywhere will publish a short series of Rongjie’s Field Notes in the coming weeks. Visit www.instagram.com/rongjiezhao/ to see more images from her Breathing series. 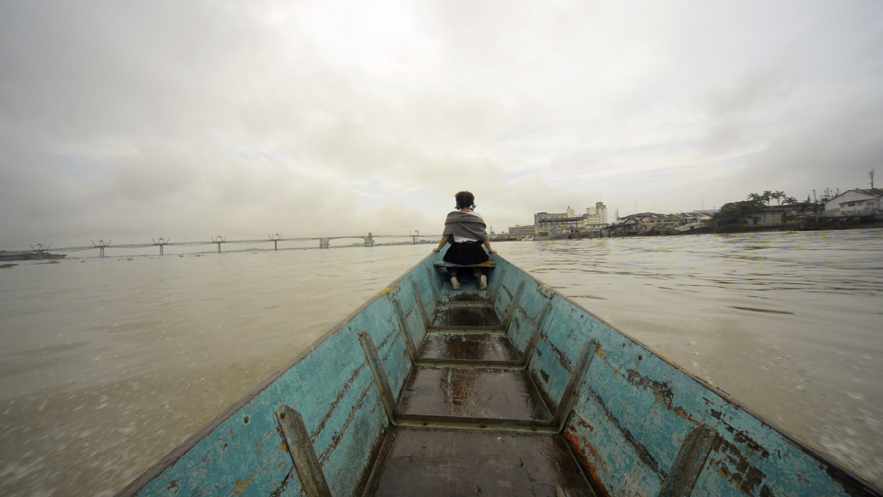